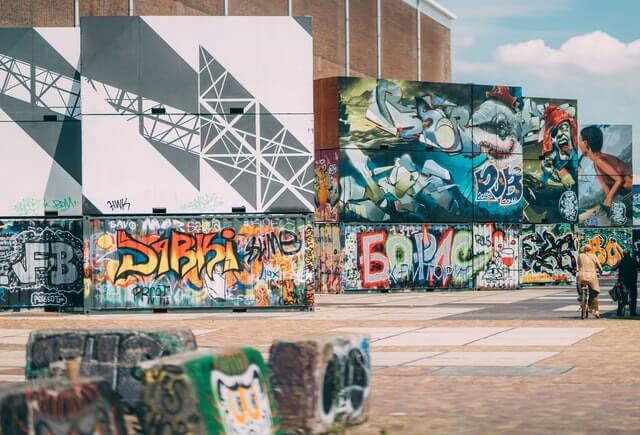 Banksy’s EUTM application covering the famous “Flower Thrower” artwork adjudged by the EUIPO to have been filed in bad faith due to a lack of intention to use the mark – as evidenced by a token pop-up shop and Banksy’s own comments.

Full Colour Black Limited (“FCBL“) has created a business of selling greetings cards and postcards bearing various graffiti based street artwork, including the artwork of the famous street graffiti artist, Banksy. However, Banksy took issue with FCBL’s use of his/her artwork and sought to prevent such use by asserting his/her registered rights.

As a result, FCBL filed an application for a declaration of invalidity on the ground of bad faith against Pest Control Office Limited’s (a company handling Banksy’s matters)(“PCOL“) EUTM registration for Banksy’s famous “Flower Thrower” artwork (as depicted below)(the “Mark“) for all the goods and services in classes 2, 9, 16, 18, 19, 24, 25, 27, 28, 41 and 42.

FCBL argued that the Mark depicted one of Banksy’s most famous artworks which had been reproduced numerous times by various commercial entities on merchandise without complaint from PCOL or Banksy. According to FCBL, at the time of filing the invalidity action, PCOL had never used the Mark and Banksy had only ever reproduced the Mark as artwork. Following the initiation of the proceedings, Banksy opened a shop in the UK called ‘Gross Domestic Product’ in which Banksy admitted the purpose of which was to prove use of the Mark – “sometimes you go to work and it’s hard to know what to paint, but for the past few months I’ve been making stuff for the sole purpose of fulfilling trademark categories under EU law“.

In addition, FCBL argued the Mark was a depiction of graffiti sprayed in a public place that was free to be photographed by the public and had subsequently been disseminated widely with Banksy’s permission. In fact, FCBL submitted that Banksy actively encouraged third parties to download and use the artwork on Banksy’s website to produce their own artwork and had a flagrant disregard for IP rights – for example, in the book, ‘Wall and Piece’, Banksy had stated that “copyright is for losers”.

In summary, FCBL’s main argument was that Banksy had no intention of using the Mark for the goods and services applied for and that the Mark was only registered to circumvent Banksy’s inability to enforce copyright in the sign.

PCOL argued that FCBL had failed to establish bad faith. In particular, the evidence did not demonstrate that Banksy had given “free reign” to the public to use his copyright for reasons other than non-commercial ones. Banksy’s statements did not change the law nor prohibit Banksy or PCOL from seeking rights and protections under the law – and deciding otherwise would be contrary to the principles of freedom of expression and equality under the EU Charter of Fundamental Rights.

In addition, PCOL relied on NEUSCHWANSTEIN to argue that a party registering a trade mark in pursuit of a legitimate objective to prevent another party from taking advantage by copying the mark is not acting in bad faith.

The EUIPO found bad faith because, at the time of filing, PCOL (and Banksy) had no intention of using the Mark to commercialise the goods or provide services. In fact, the purpose of the application was to prevent third parties from copying the mark as PCOL (and Banksy) could not rely on copyright due to Banksy’s anonymity –NEUSCHWANSTEIN did not applyas PCOL (and Banksy) was not using the sign as a trade mark and did not have a legitimate objective.

In addition, it was clear from the evidence (particularly from the comments made by Banksy and PCOL) that ‘Gross Domestic Product’ had not been opened to carve out a portion of the market but, instead, to prove use of the Mark for the goods and services to circumvent the non-use requirement under EU law.

Although outside the scope of the proceedings, the EUIPO made some interesting comments as to the copyright in the sign (had Banksy been identifiable as the author), namely that:

This case serves as an important reminder to brand owners to carefully consider their filing strategies – and to only apply for the goods and services for which the brand owner has an intention to use the mark. It is also prudent for brand owners to document their (intended) use of their mark(s), as such evidence is pivotal to successfully defending a cancellation action.